I’ve been running on and off for over three years now, and I finally got organised enough to enter my first race last weekend - a five kilometer race around the park - and I feel great for finally making it happen! 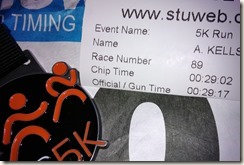 The distance is pretty much what I run when I manage to get out and hit the road, but the real achievement was to stand alongside fellow runners and say ‘I can do this.’  I had no idea how long it would take me to run the route, and I underestimated my finish time by about five minutes.  I crossed the finish line just after the average time for the race – should have fired up the Van Halen soundtrack a little earlier…

But that’s the point of standing up and showing the world what you’ve got –  on Friday, I had no idea how good a runner I was.  Now I do, with a benchmark time that shows I can run competitively, and a goal to beat.