This week, Appletree Writers are getting ready to publish an anthology to raise funds for the Dunbar RNLI, with stories based around the theme of ‘The Harbour’ – and one of them is mine. 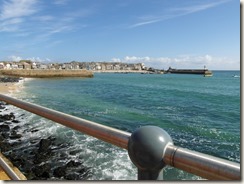 a family story (one of the legends re-told and re-argued at Christmas), which began to change as I began to retell it.  I don’t know how – the true story is vivid, and funny, but the story I had to tell took another direction.

By the time I’d edited it, I was somewhere else entirely.  Off the map, in open water.  I had no idea whether anyone else would connect with it, but I knew the only way to find out was to submit it – and I’m really pleased they did.

I’ve learned a valuable lesson from writing this little story – begin writing what you know, and when your story begins to have other plans, follow them.  Leave the harbour, and see where the story takes you.

If you'd like to read it for yourself, The Harbour is available to order from the Appletree Writers website.
Posted by Andrew Kells at 07:15