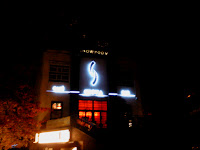 Had a fantastic time watching Sent/Received's first performance as part of Skype Me! at Showroom 5 last night.  As well as hearing works from local poets and writers, I had the chance to enjoy the company of performers from three other continents - something the generation before me couldn't dream of making happen without a lot of time and money.  True, there were glitches along the way (ably resolved by the unflappable Robin Vaughan-Williams), but it only seemed to add to the experience - I was really glad to play a part in it.

It's still sinking in that the words I began to write in June are now being performed just a few months later.  The audience laughed in the right places (and some unexpected ones), then became very quiet as my text-message tale unfolded before them.  Looking forward to seeing our next performance at Broadway Nottingham as part of the Mayhem Festival on Monday night, along with ghostly archive recordings and live readings from Niki Valentine, Pete Davis, Megan Taylor, Charlotte Thompson and graphic novellist Brick.

Still very nervous, still very excited - I'll be the one hiding behind the sofa.
Posted by Andrew Kells at 09:28