Some days, you've got to get outside... Six quid, well spent at the University of Nottingham.  Hope you're enjoying the sunshine - don't forget the sunscreen.

`This has been a wonderful day!' said he, as the Rat shoved off and took to the sculls again. `Do you know, I`ve never been in a boat before in all my life.' 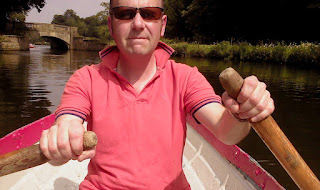 `What?' cried the Rat, open-mouthed: `Never been in a--you never--well I--what have you been doing, then?'
`Is it so nice as all that?' asked the Mole shyly, though he was quite prepared to believe it as he leant back in his seat and surveyed the cushions, the oars, the rowlocks, and all the fascinating fittings, and felt the boat sway lightly under him.
`Nice? It's the ONLY thing,' said the Water Rat solemnly, as he leant forward for his stroke. `Believe me, my young friend, there is NOTHING--absolute nothing--half so much worth doing as simply messing about in boats. Simply messing,' he went on dreamily: `messing--about--in--boats; messing----'

extract from The Wind in the Willows by Kenneth Grahame