The weather is forbidding today, to say the least: not hazardous, but as uninviting as non-dangerous weather gets.

So I've elected to do a bit of time-travelling in the footsteps of Hidden Daughter's Penny, I'm now in last Friday, in Calke Abbey:


Calke Abbey is an extraordinary place - a once well appointed country home which fell into slow, graceful decline in the 1920s, leaving entire sections of the house untouched for years.

The National Trust arrested it's decline after they began to manage it in the nineteen eighties, but have chosen not to 'restore it' in the way they have with many other properties.

What you get is a sense of the parlour state many forgotten country houses were left in, before they fell under the wrecking ball after WWII.

The result is a place unlike anywhere else I've seen. 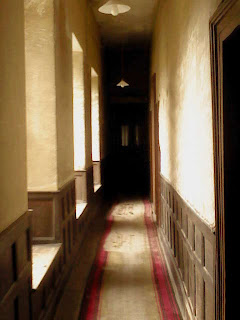 With it's fractured past, and secret world within our world, Hidden Daughter is one of those stories.

I feel very fortunate to be inspired by this strangely beautiful place.
Posted by Andrew Kells at 08:18