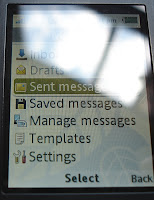 'That sounds really interesting - is it nearly finished?'

'Great, send it to me when you're done.'

In that moment, in the fierce spotlight of a cosy cup of coffee behind the NWS book stall, I decided the only way to know was by putting the idea out there, showing people, rather than keeping them locked away, in case they would break.  I took a chance, and told someone.

Five drafts and a hefty bit of editing, it's not just one of those ideas, it's a finished work, ready to read, ready to be presented at Word of Mouth's next event at Broadway Nottingham on Halloween.
Lesson learned - if you want to know what kind of idea it is, talk about it - not all of it, but enough to for you to know whether it will go the distance.  If it isn't, you've just saved yourself a lot of heartache.  If it is, get going with the next draft- remember, writers finish stuff.
Posted by Andrew Kells at 07:29