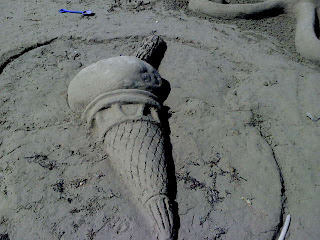 So I'm stood there, in a wetsuit.  I try and avoid the bodyboarders who fly past me, wait for a friendly looking wave, then turn around as it wells up against me.  I can feel it's power surge past me and over me, and I move!

The enthusiasm of 'You've got to try it!' had carried me all the way down to a beach in Cornwall, via a wetsuit and bodyboard shop, and plonked me in the water.  Now what?

Getting out was not an option.  I'd come here to do this, and if I came back and had to tell people I bobbed in the water like a plastic bottle, so be it.  There's a bunch of other people out on the water, and many of them are zipping past me like bullets.  But not all of them.  So it's not just me who's having trouble being at one with the waves.  And they're not getting out either.

So I stick with it.  And the more I see the people around me between drenches and mouthfuls of seawater (lovely seawater by the way, very clean), the more I realise the ones who moved like dolphins before are also the ones who are bobbing around like a plastic bottle now, and vice versa.
We're all doing the same thing - sticking with it, getting it wrong, because it's worth the effort when you get it right.  Because getting it wrong is a part of understanding how to get it right.

I cracked it on the third day, and rode my first wave.  And stopped worrying about getting it wrong.
I've spent the rest of this week working on the first draft of my YA novel, Coalface - without worrying about what's right and wrong anymore - because in a first draft, writing it wrong is always better than not writing.  My surf baptism has also inspired me to go back into the water for a couple of other stories that I thought I couldn't do any more with; and after a bit of bobbing about, I can see some good waves coming my way.
Posted by Andrew Kells at 04:46